Skip to content
I'll never look at a door the same way again.

Whether we’re willing to admit it or not we’ve all experienced something that genuinely scared the living crap out of us. You’re probably now trying to place what it was exactly that had you trembling in fear for the very first time. If you were legitimately frightened it shouldn’t be too difficult to remember.

For me it was a video game. I was twelve when I first played Resident Evil on Playstation. It was late March; a time of year when the weather is seesawing between Winter and tiny hints of Spring and the days are still depressingly short. Most games my older brother and I played together were sports games, excluding a previous legendary tag-teaming of Donkey Kong Country on Super Nintendo (screw you Platform Perils); that remains one of my fondest childhood gaming memories. Together we booted up Resident Evil, sold to our parents solely on the fact that it would be a brotherly bonding experience. That wasn’t a total lie, we bonded.

We played most of the early parts of the game together but eventually my brother lost interest. Looking back, playing this game by myself at twelve probably wasn’t the best idea. The  Playstation was set up in my brother’s room so—because of the hanging out with your older brother rule—I could stay up later to play. The opening cinematic was paralyzing. The scariest thing I had really seen up to this point in my life was Are You Afraid of The Dark on Nickelodeon. I was foreign to the concept of zombies. The cinematic explained incidents of people being attacked and eaten, the current objective being a rescue mission of a previous team gone missing; my twelve-year-old self rightly concluded that team was attacked and eaten.

Neither of us said a word during the cinematic. In fact, I’m sure we were both thinking this would be a pretty good time to turn back. Searching for the lost team in the foggy woods Albert Wesker—franchise antagonist and overall butt-head—directs the rescue team out of an ambush from a pack of cerberus (zombie dogs) to a murky nearby mansion. The mansion seemed safe temporarily as we ran from the wild dogs seeking shelter, but as soon as we stepped inside we realized this is not a safe place. The controller wires on the PS1 were so short that they pulled us just about as close to our 14″ TV as we could get without having our heads inside of it, which is just about the pinnacle (and general best practice) of early 90’s video game immersion. Controller in hand, the cinematic ends and Jill Valentine was suddenly mine to control — we froze up.

Suddenly the rescue team splits (because of course they do). I wasn’t aware of horror tropes at the age of twelve but I was smart enough to realize that splitting up was not a good idea; although it could have just been the fact that we didn’t necessarily want to roam around this mansion alone.

It was tough to read my brothers reaction at first, but it didn’t take very long for him to drop the tough older brother act and admit the game was creepy. Thank you for fessing up to that, Marc. As the STARZ team split up the mansion grew larger and more mysterious. The doors were ultimately what did me in. Open a door and an animation starts of the creaking door slowly opening. Some doors are locked in Resident Evil, others are not.

The most unsettling part of the door animation is that you have no way of knowing what’s on the other side of it until the animation ends — you’ll either walk into an empty room or directly into a group of zombies. More often than not, you walk directly into a group of zombies. The scarcity of ammo in Resident Evil didn’t help make things any less tense. To the point where I wouldn’t open a newly discovered door without ensuring I had decent health and sufficient ammo. Most of the time you don’t have control over those things and all you can do is cross your fingers and hope for the best.

I had nightmares about the doors in Resident Evil; lots of them. Even though the three bedrooms in our house growing up were right next to each other they might as well have been miles apart. The sequence of opening the door of my brother’s room night after night and then opening my bedroom door became a feat of extreme courage; I haven’t looked at a door quite the same way since playing this game. After a week or two it got to the point where my brother was rarely playing and my skin grew thick enough to push on by myself. I could have spent more time talking my brother back into playing but, at the time, I was more concerned with beating the game. I was eager to see what the next thing to scare the living shit out of me would be.

Getting space between you and an oncoming zombie or zombie-thing in order to kill them is paramount to not getting eaten alive and progressing through certain areas in Resident Evil. This was something that took me quite a bit of time to get good at. Mastering the inventory menus and interpreting all of the games little quirks was rather difficult at twelve but it made every minute of the game more terrifying (and more rewarding). 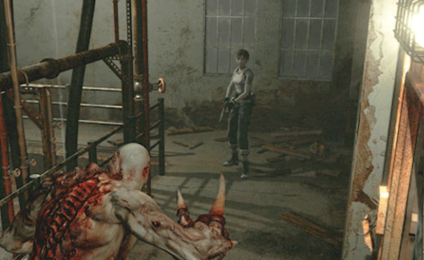 I recently revisited my original trip to the mansion back in August hoping to revive some memories to bake into this story. Fortunately, it was warm outside and the days were a bit longer. Since playing twenty years ago I’ve seen just about all the horror genre has to offer in all its forms—including all the subsequent Resident Evil games—and nothing comes close to my time with the first Resident Evil. Ascending once again from the belly of the Umbrella lab I am greeted by the Tyrant, the final boss with claws for hands that wants you dead. The Tyrant is scary, but he’s no door.